Incidents of Vladimir Putin and Justin Bieber appearing together are on the rise. World leaders and pop stars have more or less the same job. They run a confidence game exploiting the human psyche for profit and personal gain. With this in mind, it is no wonder that the human psyche is merging these disparate yet kindred personalities. Justin wants you to think he is a creative force of nature vs some outdated pedophile poster child for the boy band set. Putin wants you to think he is the virile leader of a world power vs a doughy, closeted ruler of a country with the economic stability of Detroit.  They both succeed. We think Justin is a creative force no matter how awful his actual music is. We think Putin is a strong leader of a robust country even though Russia can hardly take care of domestic issues let alone support sustained external conflicts. Actually I think Detroit is more dangerous than Russia. 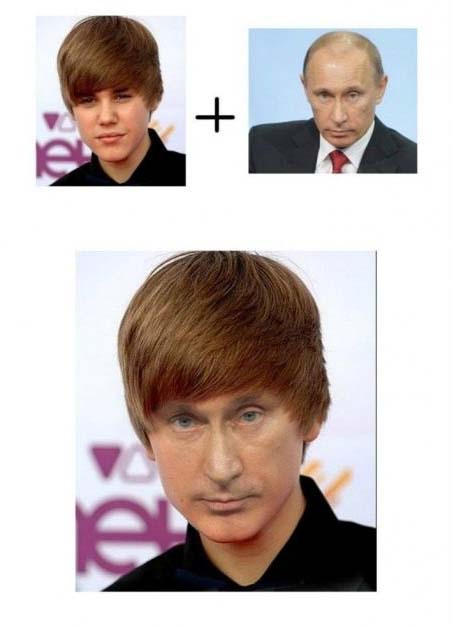 Recent conflicts with Putin and Ukraine have been in direct competition for media air time with conflicts in Justin Bieber life. News media cannot ignore the fact that more people are interested in Justin vs Putin yet people are protesting the lack of priority and clarity on these dueling subjects.  Perhaps the subjects should not dual at all. They could be part of the same news story.

Justin and Putin have many like characteristics forcing this media phenomenon. They both have an odd fascination with being photographed shirtless. 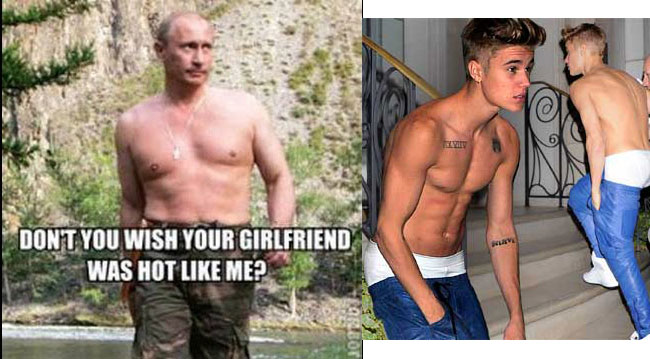 They both look to portray an aura of masculinity yet they appear incredibly bisexual at the same time. This could be what makes them so loveable to the world.

They are both going through a period of adolescent rebelliousness that could be dangerous to others. 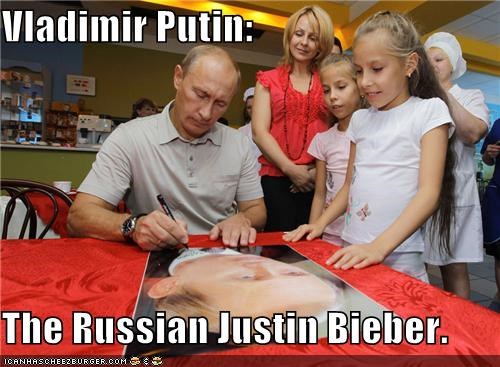 Justin desperately needs to write a song that adults actually like. Putin desperately needs to develop something other than vodka to make Russia a world power again. If they combine forces, Vladimir and Bieber may succeed at resuscitating their dwindling careers. If they continue to complete for attention the world may abandon them both.  If Putin invades the Ukraine with Justin it could be more of a cultural event. Then again Pussy Riot would probably kick his butt before he gets out of Moscow. 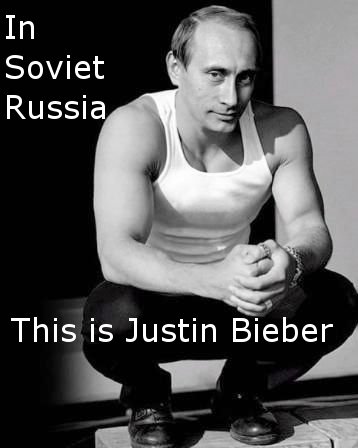 From a Google Perspective, interest in Justin has been declining for years. Putin enjoyed a brief spike due to Ukraine activity but overall interest in him is well below Justin on a flat line. Ukraine interest has been on a steady rise for years with a rapid increase based on recent news. If Justin and Putin Join forces for a musical invasion of the Ukraine I am certain they will exceed interest of Justin alone on his best day.