The Asian Elephant Art and Conservation Project raises money by selling artwork created by elephants.  The art ranges from $350-1500.

Elephants aren’t the only animals that paint.  Justin is a Friesian horse that paints.  He also goes on tour giving painting demonstrations.  On his website it says “His technique is loose and his brush strokes vary from bold and heavy to light and wispy.”

Beluga whales in China and Tokyo have also learned how to paint. They use specially adapted paintbrushes that they hold in their mouths.  They show off their skills at aquarium shows. Some activists object to their training and captivity.

Mechi is a 3,500 pound painting rhinoceros.  The 29 year old rhino paints with her lips at Mesker Park Zoo in Indiana.  Zoo keeper Jill Remington says “She goes crazy with her lip, You can tell she doesn’t want to stop.”  She created her first painting when she was 24 years old. 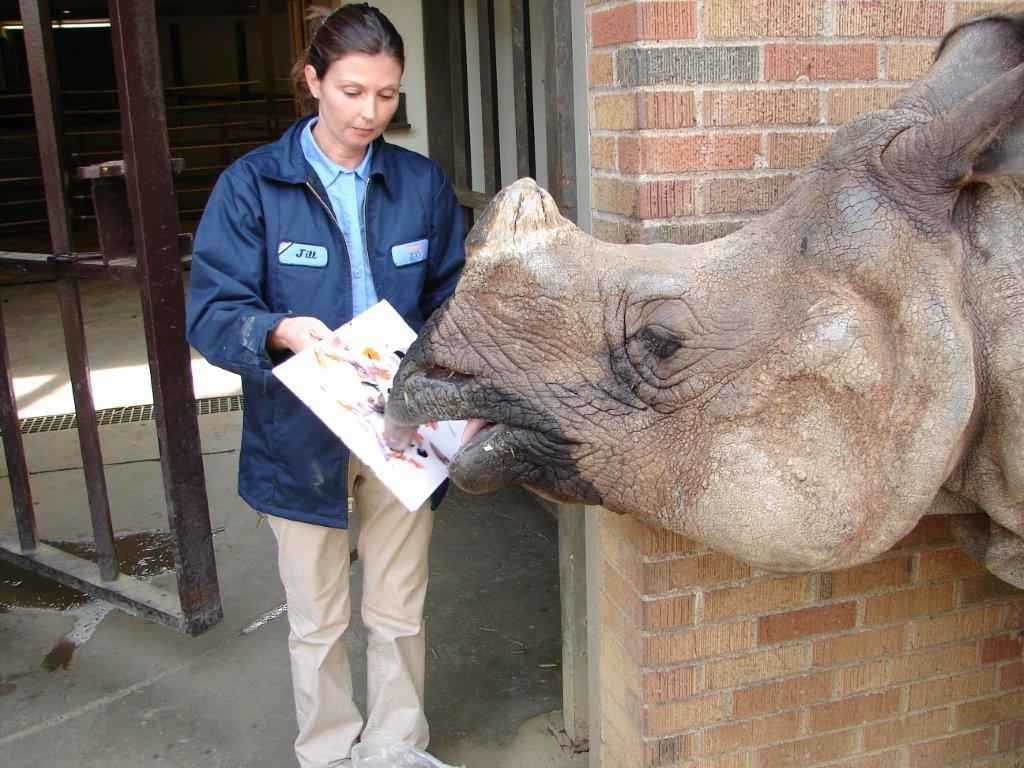 Her works have been made into Zoo stationary, given as special thank you gifts to donors, and raffled to benefit the Indian rhino conservation.  Prices for her work are more modest than the elephants’.  Flat canvas boards go for $100 for 8-by-10s and $75 for 5-by-7s. Canvas boards with a two-inch thick box frame sell $125 for an 8-by-10. Some limited edition paintings on paper, including some of the very first paintings Mechi did, sell for $20 for an 8-by-10 and $15 for a 5-by-7.

According to the Mesker Park Zoo website, Zookeepers use an animal training technique referred to as “target training” to aid in accomplishing everyday tasks such as shifting animals from exhibit space to behind the scenes housing.  Target training is a very useful technique not only for everyday animal care, but also during veterinary exams and procedures.  To target train, the zookeeper will first ask the animal to find their target.  When the animal finds the target, the zookeeper will whistle, confirming to the animal that they have exhibited the correct behavior.  This whistle is called a bridge.  Immediately following the bridge, the animal receives positive affirmation (fresh produce in Mechi’s case) as a reward for their actions.

Mechi’s painting sessions utilize the target training technique.  Paint is applied to a canvas and Mechi is told to target.  She finds the target with her mouth and her prehensile lip acts as a brush, quickly moving paint around the canvas, creating colorful swirls and designs.  The zookeeper will bridge and reward her until she is finished with her painting.  This abstract form of art is not only an enjoyable hobby for Mechi, it is also snack time.  While Mechi is painting, she munches on her rewards of fresh produce such as carrots, bananas, and sweet potatoes.

Have you seen an animal that can paint?  Do you paint?