Hillary Clinton vs Khaleesi The Mother of Dragons

Hillary Clinton is expected on Sunday to announce her intention to seek the Democratic presidential nomination in 2016. The Game of Thrones season premier is also scheduled for the same Sunday. This brings up the question: who would you vote for Hillary Clinton or Daenerys Targaryen (Khaleesi)? There are a few key differences to consider.

Khaleesi is the Mother of Dragons and comes with her very own live dragons. If we vote for Khaleesi her dragons automatically become part of the US military program. Tanks, bombs, and super jets are great but nothing says “I am in charge” like a fleet of loyal fire breathing dragons.

Hillary Clinton on the other hand has no dragons but she is lawyer. If we vote for Hillary, her husband bill automatically becomes our first gentleman. This gives us two lawyers for the price of one which is rather important since everyone knows that lawyers truly understand the “people” and always do the right thing for the greater good. While her relationship with Bill is not based on fidelity, nothing says loyalty like staying together after sleeping with a teenage intern. 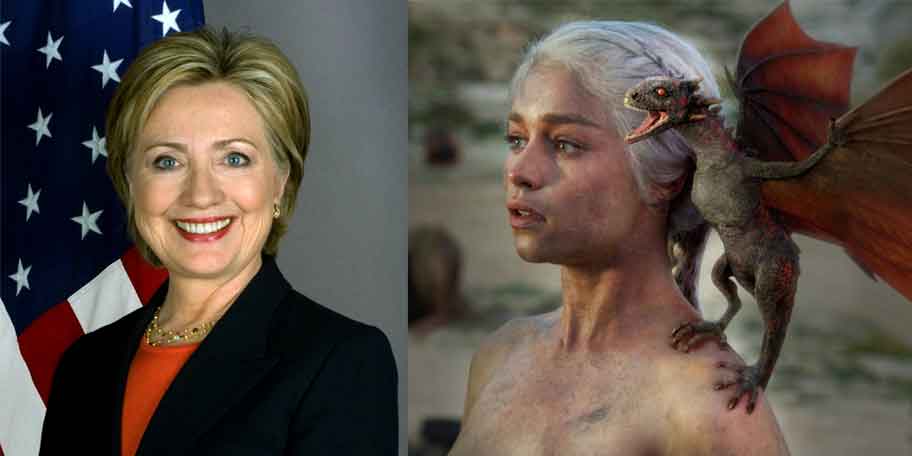 Based on these points I would stay with Khaleesi. Unlike Hillary, she knows when it’s time to kill her husband. Now let’s take a closer look at the candidates in their own words. Here are a few quotes for comparison:

In terms of public speaking and overall leadership Khaleesi is a more compelling candidate. Hillary Clinton is a smart, well-spoken, seasoned politician. The Mother of Dragons is a relentless leader that will take her convictions to death and beyond while Hillary has been to known to waver her views on occasion.

Modern political elections are a lot like the Game of Thrones. They are both full of lies, deceit and unqualified leaders. At the end of the day planet earth is really one place where humans live together. Traditional nation states are an outdated concept. We “the people” do not give a crap about the ideals that our leaders use to keep killing our children. We just want a happy safe life. The key to a safe and happy future for all humanity is one government for the entire planet. Something like the Star Trek global federation where all humans work together for the greater good. Given our situation I feel that Khaleesi is much better suited for world domination. Don’t you?